How to analyze  LOB & LOD Definition

Before routinely using your digital PCR assay, you should estimate the Limit Of Blank (LOB) and the Limit Of Detection (LOD).

Starting with the LOB, the estimation of the LOD will be then derived from this estimated LOB.

How would you define each parameter?

When the number of positive partitions found in a sample is: 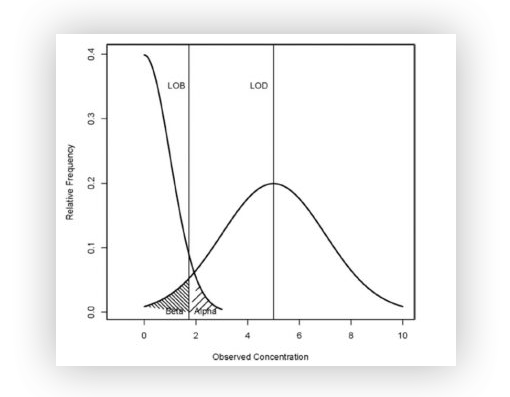 Figure A : Illustration of LOB and LOD

Here are the mathematical definitions of LOB and LOD :

To go further on a method to calculate the LOB of a given digital PCR experiment, do not hesitate to have a look at the memo LOB calculation Method.

In other words, this is the minimum concentration that can be said to be non-zero and statistically higher than the limit of blank \(LOB\) with a \(1 – \beta\) probability (typically 95% for \(\beta = 5\%\) of false negatives).

Knowing the LOB, if you need a method to calculate the LOD of a given digital PCR experiment, do not hesitate to have a look at the memo provided LOD calculation Method.

If you need to automatically compute the LOB and the LOD of a target gene from a set of negative control replicates, an online tool is provided for automated LOB and LOD estimation, let’s try it !